Just curious who remembers the show and what the interest level may be.
Either RP, or just general interest. Anybody?

Storylink Radio is planning a longterm project to recreate, at 1:1 Scale, Moonbase Alpha from the TV series Space: 1999
The full base will cover about 16 regions of land area.
Like all our worlds, it will be a storytelling venue and open to RP.

We're building this creation this on a 2x2!! At Full Scale! Using some clever automatic teleporting and ondemand rezzing visitors will be able to visit the full 16-region base on our 2x2 world. (unless someone wants to donate a 4x4 to the cause - LoL)

Tidbit: The Eagle Transporter ship is one of the iconic space ship designs that most people remember, and is of course available in Opensim from Arcadia Asylum. You can pick up your own free copy of the ship now at Spaceworld in Kitely.

You can revisit the show and all the details at: https://moonbasealpha.fandom.com/wiki/Moonbase_Alpha

Full Scale.. and then some

Since everything is bigger in the virtual world... e.g. average Avatar height is 6.9 feet  vs  RL 6 feet...

We've decided to build Space: 1999 Esellar at a slightly larger scale of 115%

Actually this is a lesson learned from our Newgrange recreation where we painstakingly did 1:1 exact scaling, only to realize after all built that everything looks too small for the average avatar.

We are using the Space: 1999 Technical Manual for all build references. 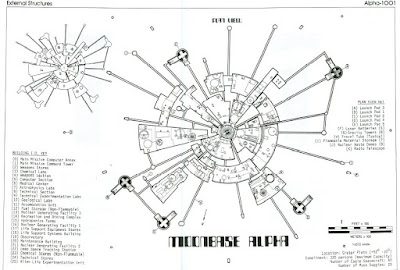 Is That Gonna Fit?

In a small concession to building in the Virtual World we have slightly rearranged a few pieces of Moonbase Alpha in order to fit on a 1024m x 1024m.

All locations and stations etc in the original MBA have been retained for RP purposes tho. 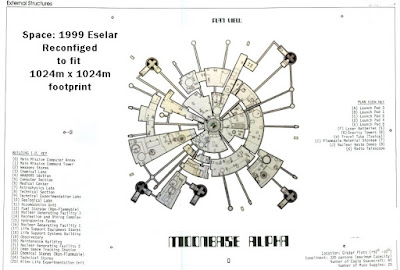 This is a pretty big build, including buildings that are circular sections and larger than 256m, so yes it was tempting to use megaprims. Especially since we can now build our own custom megaprims up to 4096m.

But it gets a little bit fiddly working with megaprims, besides having to create each custom one individually.

Also due to nature of, well whatever it is, when you get a big prim, say a cylinder, and hollow it to 99%, its' physics stays at 95%, meaning you can only approach the edge of it so close, and not quite to the edge.

But even more importantly, since the change from OpenSim 0.8.2.1 to OpenSim 0.9.1.1 megaprims are not allowed to be non-phantom. While this is actually only one tiny line of server code, well a switch or flag really, it seems silly to beg the Powers for that.

AND, if we were working with phantom megaprims as buildings, we would then have to add invisiprims to maintain solidity of walls and such.

So, the long answer is no, we are not using megaprims for most of the construction, but will be using some megaprims for environment etc. For example our moon surface is 1536m x 1536m

Below is an overview of MBA seen from altitude, the moon surface is a single 1536m x 1536m megaprim.

The demarced box in the middle is the actual 2x2 land area of the host world.
The four perimeter boxes are additioanl 2x2s that will be visitable with auto-teleport on this same sim, making it possible to fit this 4x4 project on a 2x2 world. 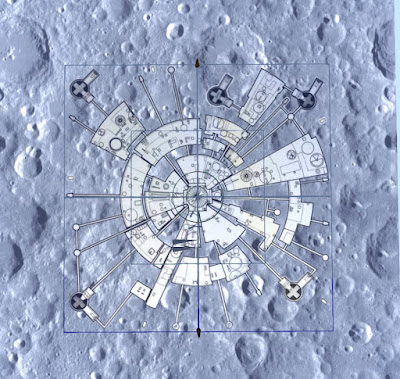 SPACE: 1999 - Moonbase Alpha Quote So who remembers Space: 1999? Just curious who remembers the show and what the interest level may be. ...